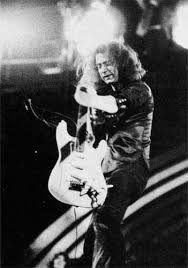 Heres a clip at Norms rare guitars when he finds it


And he's playing it live. Its not in a vault